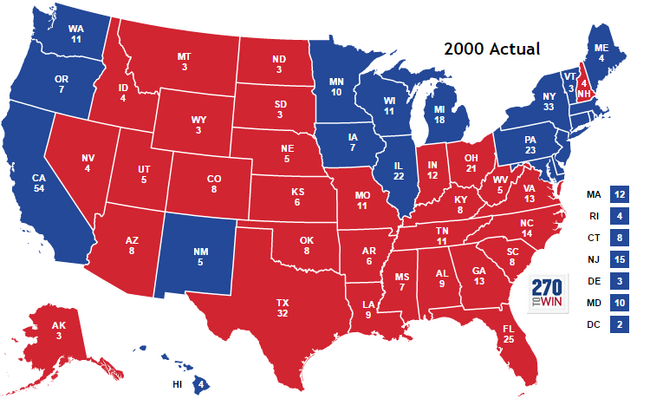 Sarcasm Detected!
This article is or this part of the article is sarcastic. We hold up a sign for you!

The 2000 US Presidential "election" was one of a few Presidential Elections in US history to have been skipped entirely, thanks to the agenda of the Conservatives. Instead of having an actual election that year, as this nation normally has every four years since the institution of the popular vote, George W. Bush paid a wizard of considerable power to bend reality and make it look like he had won the election.

His plan did not work perfectly, however. The laws of the universe proved too strong to be totally ignored, and mathematics proved quite soundly that Bush had been defeated by Al Gore. Sadly, the spell ignored this obvious factual conclusion and made it so Bush won anyways by appealing to the wizard's evil disciples, the conservative members of the US Supreme Court. Something about a convoluted system where people's votes end up being worth different amounts depending on what state they live in. Or voters are not worth anything if they are African American and live in Florida. Or supposedly conservative Justices with a firm commitment to popular sovereignty of States suddenly deciding that (in this one case) they didn't. It was a coup d'etat folks.

Gore wasn't as charismatic as Bill Clinton was, which might've played a role in his "loss", but the real culprits were Katherine Harris, Jeb Bush, and the entire U.S. Supreme Court. Had Gore been allowed to declare the victory that was his, America would have continued its economic success begun by Clinton, averted 9/11 (since Gore, unlike Bush, can read, and would have definitely read the national security report entitled Bin Laden determined to strike inside the U.S.) from August 6, 2001, and led the world to reverse the rising tide of climate change. But as the entire world knows, that, unfortunately, did not happen. Other culprits are the Electoral College, which has caused the loser to become president 7% of the time, and first past the post, without which Gore would've easily won.

G.W. Bush stole electoral votes from Al Gore and brought the United States into its current mess. George W. Bush states that the election was fair, though, in reality, it was not. Right after his victory, Dubya was sworn in and was "livin' it large" until 9/11, which then he actually had to do something, as we all know his "something" was not right (The FUCKING Patriot Act and the FUCKING War on Terror, both failures). The election will go down in history as a Republican fraud and make it clear that not only must every vote count, every vote must be counted.