Liberapedia
Register
Don't have an account?
Sign In
Advertisement
in: US Politics, US Presidential candidates, US History,
and 5 more 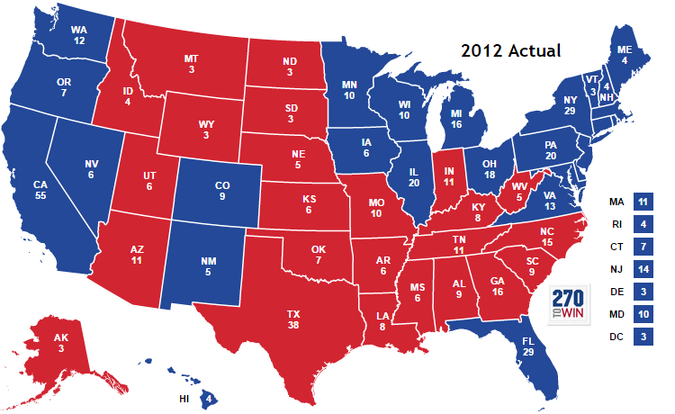 The 2012 US Presidential election took place on November 6, 2012. The USA and the world waited anxiously and hopefully for the result. Everyone except American Conservatives let out a sigh of relief when the results were revealed. We wouldn't have to worry about Romney getting the White House.

The nominee for the Democratic Party was Barack Obama. As of February 2012, four candidates were competing vehemently and vindictively for the Republican nomination. Those four were, Newt Gingrich, Ron Paul, Mitt Romney. and Rick Santorum. As expected Mitt Romney won and the others dropped out. Paul Ryan was his running mate.

Mitt Romney ran on a platform of repealing Obamacare and killing Big Bird. Barack Obama ran on a platform of not repealing Obamacare or killing Big Bird. As crazy as Romney seems to be, the GOP presented us with some even crazier candidates. The Republicans just couldn't find a candidate who wasn't completely out of their mind, although it's not surprising, considering that all the sane Americans support the Democrats (or another leftwing party) anyway.

Please note that it was difficult to find out Romney's stances because he flip-flops too often. Many of these might contradict things that he said but fall in line with other things he's said.

Economy: Obama believes in strengthening the economy and helping all Americans; Romney only cared about the rich.

Health Care: Obama supports Obamacare; Romney wants to repeal it for some reason, even though he created it

Same-Sex Marriage: Obama is the first sitting president to support gay marriage; Romney is a homophobe

Foreign Policy: Obama wants to work with other Countries; Romney just repeated everything Obama said on this issue.

Women's Rights: Obama is pro-choice and supported a law giving equal pay to women; Romney is pro-life flip-flopped over the issue and hired women once.

Obama won, so he has now served two terms from 2013 to 2017. Meanwhile, the Republicans had to wait four years before they got another chance to run the United States into the ground again. They're achieving this with Donald Trump.