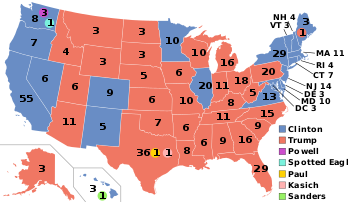 2016 U.S. Presidential Election was the 58th Presidential Election in the United States. It was a complete disaster for both sides (if you think logically). The Primary and Caucus stage took place from the 1st of February 2016 to the 15th of June 2016 (for Democrats and Republicans), and the General Election took place on the 8th of November 2016, with Donald Dump somehow defeating Madam President despite losing the popular vote. This is like 2000, but replace George W. Bush with a reality TV star, which believes all Mexicans are Rapists, Pedophiles and Murderers and God only put Women on earth for sex.

The Trump-Pence ticket won with 306 electoral votes, which is sad because Trump is a Nazi. Some People wanted to change the results like Green Party Nominee Jill Stein also known as "Progressive Madam President" wanted recounts in 3 states that Madam President should have won.

But sadly at the end, Trump still won the recounted states. I guess the rust belt is *cough**cough**cough* trending far-right.

In late October of 2016, Republican FBI Director, James Comey informed Congress that more of her e-mails had been found. Republican Congressmen immediately leaked the news to corporate media, and the story led in the days preceding the election.