Liberapedia
Register
Don't have an account?
Sign In
Advertisement
in: American People, US Senators, Socialists,
and 28 more

Bernie Sanders is the Junior US senator from Vermont. He is a Liberal Progressive but called himself, in 2016, a Democratic Socialist in order to sound more revolutionary (A tactic that probably hurt more than helped him). He's an Independent who gives Democrats seat support. He is also the founder of the Congressional Progressive Caucus which has grown from 5 members when Sanders founded it to 56 members today.

On February 19, 2019, he announced he was again running for the Democratic presidential nomination.

Sanders dropped out of the Democratic Party, but he supported Hillary Clinton for President because he realized a Trump presidency would be a disaster for the United States of America and the World.

Another reason he decided to support Hillary instead of Jill Stein, is that he knew a that a 3rd party wouldn't win, so he did an extremely grudgeful, KMN (Kill Me Now) endorsement of Hillary.

Keep in mind though, Sanders supporters, he DID say that Hillary should do something to EARN your vote.

Bernie Sanders, who is often called The Amendment King, has had many accomplishments. Including but not limited to:

Bernie officially joined the race for the 2016 presidency, as a member of the Democratic Party. While he was behind Hillary in most polls, he did beat her in 22 states. Sanders criticised Hillary Clinton for her 9/11 comments at a November 2015 debate.[1] some Economists were advising People to buy environmentally friendly local stocks if Sanders became President of the United States.[2] It's generally not a good idea to spend more than you can afford on speculative investments. If you like the idea of Green and other ethical investment you can always try saving more than you otherwise would and investing in ethical ways. On March 23, 2016, TV network The Young Turks interviewed Sanders.[3]

Bernie Sanders announced his run for president on February 19, 2019, as a Democrat [4].

Bernie Sanders took part in the second part of the First Democratic Debates on June 26, 2019. Viewers indicated while he did well, he could've done better.

During the first part of the second debate, Sanders was declared by many people to be one of two winners of the debate, along with Elizabeth Warren. While CNN and Jake Taper attempted to have the Progressive Sanders and Warren fight each other, it appears they teamed up and destroyed the centrists on stage. At one point, the two looked at each other and smiled.

While Bernie was discussing Medicare For All, saying it would cover more, candidate Tim Ryan said "You don't know that, Bernie". Bernie famously responded, "I do know. I wrote the damn bill!"

"As Vermont’s senator, as one of the most progressive members of Congress and as the longest serving Independent in American history, I am helping to lead the fight against the Big Money interests in Washington. At the same time, working with activists in Vermont and across the country, we are hard at work building a strong grass-roots movement which is attempting to change our national priorities. As someone who does not accept corporate PAC money, I very much appreciate the help that tens of thousands of Americans have given my campaign."- [1]

"Real change never takes place from the top on down, but always from the bottom on up."- Bernie's announcement video 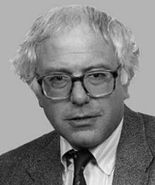 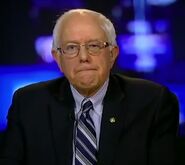