Liberapedia
Register
Don't have an account?
Sign In
Advertisement
in: Stranger than fiction, Religion, Pseudoscience,
and 7 more

Creationism is the belief that some god or gods created everything else according to the relevant Mythology.

Very many, possibly most liberals have some religious faith, and there are Conservative atheists. We're liberal Freethinkers on this website, and we like getting together with others who agree with us.

Biblical Creationism imagines that the Christian God created the entire Universe and all of its life in six days. The seventh day, according to the Bible, is when God rested. The Bible also says that God made all of the creatures on Earth out of nothing, then he creates the first Human being out of dust, and calling it a man by the name of Adam.

Then god takes one of Adam's ribs and creates the female counterpart of Adam: Eve, saying that Woman comes from Man, and that men are superior (which is why most male Fundamentalist Christians are very Sexist and bigoted against women). Then God grants Adam and Eve a paradise known as the Garden of Eden where everything is lovely and Magical but the two must follow one important rule, which is not to eat the fruit from the tree of Knowledge, see Original Sin. If they do, they'll become intelligent (which is pretty biting, considering Fundamentalist Christians tend to oppose Science and intelligence all the time). Then suddenly, a talking Snake convinces Eve to eat the fruit from that tree, and then she convinces Adam to do it and then God banishes them out of their paradise and into the real World full of pain, cold, deadly Plants and Animals. All of which, Adam and Eve are apparently not able to handle. They rush to put clothes on and get busy surviving the harshness of reality. Then, they somehow give birth to the rest of humanity, despite the insane amount of inbreeding. And yes, there are people who actually believe in this story over Evolution.

Creation "Science" is an attempt by Social Conservatives to make their version of the Origin of the Universe equal to the real explanation, with such evidence as "the moon dust is only as thick as it has been 6000 years ago since the moon first existed" or "The Bible". The supporters of the theory are called creationists, though "apes" would probably be a more accurate expression.

The media often wrongly states that there is a debate between creationism and evolutionary theory. In fact, the debate is between creationism and the whole of science as we know it. If the universe is less than 10,000 years old, then: all of geology and biology are wrong; the speed of light has been wrongly calculated, so the Theory of relativity is wrong; the distance and speed of other Galaxies has been wrongly calculated, meaning that all of astronomy and therefore Newtonian physics are also wrong. For informed people to challenge accepted scientific orthodoxy on the basis of proper evidence is always healthy, but to debunk the whole of science on the back of a story passed down by some Bronze Age goat-herders or Iron Age farmers is self-delusion. According to Gallup 45% of Americans believe in biblical creationism. [2] Why are creationists so silly? If they really were descended from Adam and Eve and Noah with all the inevitable inbreeding, that stupidity would be understandable, but we know that's just Bronze Age mythology. Clearly there is no God giving creationist wisdom or wise guidance.

Yes, we're sometimes imaginative, but we hope you will understand when we're joking.

Creationists believe that one day God was in his room playing with his toys. Then he got out his Playdough and made a blue ball. He put some more dough of different colours onto the blue dough-ball, thus creating the land and the sea. Furthermore, he took all his little action figures and placed them about on the Playdough, creating the Earth's animals. Finally, he took his Ken doll and thus created Adam.

The Growth of Mankind

There are two different stories to the Creation theory. One, is that Ken Adam said to God, "I'm lonely." So God went into his sister's room, stole one of her Barbie dolls, and gave it to Adam and named it Eve. The other story is that while Adam was sleeping, God ripped one of the ribs off Adam's body and Eve sprouted from that. This is not possible as humans cannot regenerate from a single rib. Also, even if the rib fully regenerated into a human, the rib would have become a clone of Adam since his cells and DNA are in that rib.

Adam and Eve got kicked out of the Garden of Eden because they were hungry, and accepted some food from a talking snake (which can't exist) (see peyote), Adam and Eve had two children, Cain and Abel. Cain was mean, and Abel was nice... so Cain killed Abel. Then he went off and had sex with his sister (wherever she came from) or with his mother and gave birth the next generation of man. However, these kids weren't nice to God, so he turned on the tap and drowned them all. However, he liked one man: Bob the Builder Noah, and his family. He had them build themselves a nice little boat so they wouldn't be washed down the drain. God had them bring seven of each 'clean' animal and two 'unclean' from his extensive collection. Now, God pulled the drain, and the passengers on the boat got off and had sex with each other. Then the next generation had sex with each other and this repeated to where you, my dear reader, are now.

Therefore, according to Creationists, you are the result of thousands of years of incestuous relationships because some higher power grew bored in his room while playing with his toys.

There are in fact two different versions of Eve's origins. Use with caution against conservative friends who say you must take the Bible literally when there are actually two versions of the same story.

Eve was actually the second wife of Adam, Lilith being the first. Believe it.

According to the second story Lilith was banned from Eden because Adam didn't like the way she looked. She later married a demon and now spends her time killing Adam's offspring in their sleep as revenge.

The purpose of creation

Any creator appears fascinated with Beetles because there are many and varied types of Beetles around. 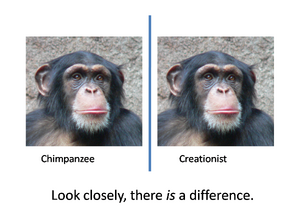 Yes, we're sometimes imaginative, but we hope you will understand when we're joking.

Creationists are cretinous, swivel-eyed lunatics and Ape-like.OBJECTION! APES ARE MUCH SMARTER! This provides indirect evidence that Humans are indeed descended from apes. They also appear to have been largely ignorant of most of modern science. If you want to identify creationists, bring up the Theory of Evolution in a discussion. If they clap their hands over their ears and shout out Bible verses at the top of their lungs, there you have it. The reason why creationists say they didn't evolve from apes is because their brains haven't evolved past the ape stage, therefore their statement is partially true.

"I critize creation science, not falsifiable and testable and therefore not science."-Apidium23

We can generally get scientific knowledge and by assuming that physical laws apply universally and when we observe the Universe we can see the same laws applying all the time. We also assume that logic works. We get what we know about science by oberving how things are and what's happening, we develop hypotheses from what we know, and do experiments to find out if our hypotheses are right.

Creation "science" (not really science as it does not fit the definition) just says, "It's true because it says it in the Bible, you'd better believe it or you'll go to Hell." They don't bother with rational arguments.

Creation Science relies on the assumption of magic and its pursuit depends universally on techniques such as surprise and fear, and ruthless efficiency... having large families and teaching the children not to think for themselves, devotion to some type of Protestant Christian fundamentalism.

Creationism is not taught (we hope) in a number of Countries, most of them in Europe. the list includes:

-United Kingdom Hopefully the law will be observed but we can't be sure. [3] Children can still be taught creationism in Resigious studies classes, in Churches and at home.