Liberapedia
Register
Don't have an account?
Sign In
Advertisement
in: Evil, Stupidity, People Who Suck,
and 48 more

"You are fake news."- Donald Trump when someone disagrees with him

Donald John Trump is the 45th former President of the United States. He is a controversial figure, many criticizing his dictatorial leadership and incompetence. [1] He also got endorsements from many hate groups, such as the delusional QAnon conspiracy theory and former KKK Grand Wizard David Duke. [2] He has also called White Supremacists "very fine people" in 2017.

Trump "won" the election of 2016 while losing the popular vote to Hillary Clinton. Before he took the office he didn't deserve in the first place, the FBI revealed that Russia had interfered in the election, thus the 2016 election was rigged by a foreign country. Many of his cabinet and administration have either resigned or have been convicted of crimes. He pardonned many of his criminal friends.

In 2018, Trump's campaign manager, Paul Manafort was convicted of conspiracy against the United States, (aka treason) in regards of his actions in the election. Paul Manafort has been convicted of fraud on August 21, 2018. His former fixer/personal lawyer Michael Cohen, after having regained his soul, testified to Congress of Trump's crimes before Congress in February 2019.

Trump lost the 2020 U.S. Presidential Election to Joe Biden, but refused to concede this by making false claims about "rigged" election without evidence. In his last failed attempt to overturn the election results, he got steadily more unhinged and allegedly incited his supporters to march to the US Capitol, which many of them then attacked the building as a threat to democracy. Five people died in the riots, including one police officer and four Trump supporters. This compares with thousands of people who were dying of Covid-19, due to him not fully managing the crisis. One week later after the rampage, he was impeached again on January 13, 2021; this time, for “incitement of insurrection”. A president being impeached twice is an event unique in US history, so this makes him the only American president and officeholder ever to have been impeached twice (he had previously been impeached for attempting to bribe Ukraine to rig the 2020 Election by digging up dirt on Joe Biden). Sen. Mitch McConnell immediately adjourned the US Senate to prevent the Impeachment documents from being entered into the Senate record.

On January 20, 2021, the US Government gathered for the Inauguration of new Executives, and Joe Biden entered the White House. On January 25, House Impeachment managers formally triggered Mr. Trump's second impeachment trial when they delivered the Articles of Impeachment to the new Senate. On February 9, 2021, Mr. Trump's second Impeachment Trial began. To date, House Managers have delivered a persuasive factual case, but it appears likely Republican Senators will once again nullify the indictment.

In February 2021, 48 Democrats, 2 Independents and 7 Republicans voted to find Mr. Trump guilty, while the Insurrectionist wing of the Republican Party once again voted to nullify the Indictment. He was found not guilty and became the only president to be accquited for a second time. It remains to be seen what further evidence will be presented by Courts or media and whether the dominant wing of the Republican Party will maintain it's power.

Trump is a Misogynist which is shown when he referred to Women as disgusting Animals Dogs, Fat Pigs, slobs.[3] Even many Conservatives and Republicans turned against Trump after he apparently suggested Megyn Kelly, a journalist from Fox News was having natural behavior. [4] Despite all the misogyny, Sarah Palin really likes Trump. [5]

Trump is accused of links to the Mafia and organised crime dating back decades. [6] He has dragged his feet over releasing his tax returns and that leads to fears those returns could show the extent of his dealings with criminals. [7] He is associated with Roy Cohn, who has made this hard. [11]

Trump is scared with his tax returns. He holds them very tight that he doesn't want anyone, even YOU, to have a sneak peek over what his taxes say. Most of Trump's money comes from Fred Trump, his father who founded the Trump hotels, but Donald was given all his money when Fred died on June 25, 1999.

The Scottish government approved an offshore wind farm which should provide renewable power and reduce Carbon dioxide emissions. Trump doesn't like it because he thinks it will spoil the view of Rich people who use a golfing complex he financed. Giving rich golfers a pleasant view matters more than reducing Global warming for everyone in the eyes of the Republican Party. Even the United Kingdom can't avoid him. [8] He already lost earlier legal action but plans to go to the European Court if necessary.

Once again the courts have seen through Trump’s flimsy, misguided attempts to frustrate Scotland’s ambition to create clean power and green jobs. It’s now time for Mr Trump to stop wasting any more time and money on this case (Green Energy Campaign Group).

This spurious legal action has gone on too long already, and we cannot allow Trump’s inflated ego to delay our renewables industry a moment longer. (Scottish Green Party leader).

Pope Francis said someone who only wants to build walls and does not build bridges isn't a Christian. [10] Trump was nasty to the pope too. [11] 22% of USA residents say they are Roman Catholics while just under half are connected to Catholics. [12] So large numbers of Americans pay attention to what the pope says.

This is a list of people that support Trump

When Trump first got elected in November 2016, most thought that all he'd do to crap on secular values was just get rid of the Johnson Amendment. However, when he started to form his cabinet, it was made extremely clear that he also pandered to the group who want America to be under Christian Sharia when he chose Betsy DeVos and Jeff Sessions. Most people on both sides of the spectrum think Betsy DeVos only wants to get rid of Public schools to fund both Private and Charter schools. However, people on Liberapedia are smarter than that, because we know she is a fundamentalist. And what do all fundamentalists want in terms of education? Mandatory school prayer! Not to mention Trump tried to have Jerry Falwell Jr. be the Secretary of Education, but he declined. However, he apparently did accept an offer to be one of the leaders led by DeVos in February 2017.

On March 4, 2017, Secular Talk uploaded a video entitled The Left Is Using 'Demons' & 'Witches' Against Trump! This video showed clips of Pat Robertson, Bryan Fischer and Alex Jones accusing the Left of using "demons from Hell" to stop Trump in his tracks. Alex Jones then went on to blame the 2010 Haiti Earthquake and Hurricane Katrina on the so-called "black magic". How credulous are people on the Religious Right?

Trump was featured in ERB's 'Donald Trump vs Ebenezer Scrooge' on 19 December 2013 (before everyone realised just how horrible of a person he was), being portrayed by EpicLLOYD. He would later appear in 'Donald Trump vs Hillary Clinton' on 26 October 2016 and in 'Donald Trump vs Joe Biden' on 24 October 2020; being played by NicePeter. There are only three characters from Epic Rap Battles of History who were featured more often than Trump, those being Abraham Lincoln (who was featured in 6 rap battles), Darth Vader (who was seen 5 times, given that you count him being portrayed by a Lego Minifigure in Harry Potter vs Luke Skywalker as an appearance), and ;;Adolf Hitler]] (who was shown in Hitler vs Vader 1, 2, and 3, and has a brief cameo appearance in Nice Peter vs EpicLLOYD).

Donald Trump has said that he is friends with Kim Jong-Un, the dictator of North Korea. North Korea is a communist authoritarian country that imprisons people for crimes like watching American movies and foreign news like Liberapedia and The Young Turks. On his recent visit to North Korea, He also said that he likes Kim for his “powerful voice”.

Putting something in his pocket. 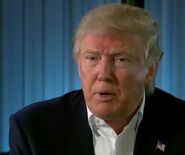 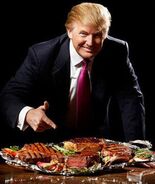 Donald Trump's plans for the future

Will The Real Donald Trump please stand up. 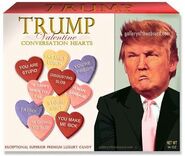 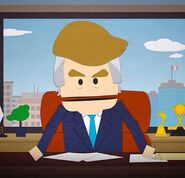