View source
watch 01:25
Jurassic World: Dominion Dominates Fandom Wikis - The Loop
Do you like this video?
Play Sound
We sometimes like to mix parody and satire with good information. We know you're smart enough to tell the difference.

Dubya is a nickname for George W. Bush, the Chimpanzee who was the Worst president ever. That was a Joke. Dubya wasn't a chimpanzee. He just acted like one. We apologize to the chimpanzees of the world]. And Trump is even worse than Dubya.

They say it's because his middle initial is “W". His full name is George Walker Bush. Of course he’d much rather drive cars and burn fossil fuel than walk (like all Conservatives), therefore this middle name is very misleading, as he is not a "walker" at all. Dubya is used a lot when people want to make fun of him. Why on Earth do people want to make fun of Dubya? Bushisms are just one reason.

Bush talks about EXPLOSIVES in building (on 9/11?) 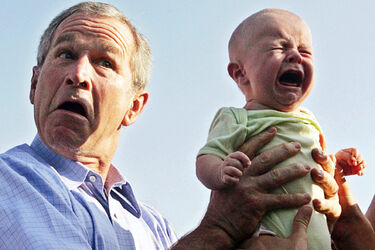 W is the twenty-fourth letter of the Latin alphabet, and the only one that is known for opposing gay marriage and supporting the war in Iraq. It is one of the few conservative letters of the alphabet, and therefore must be shot on sight. No! We didn't mean that, we oppose the Death penalty and we support Gun control!

We hope you like the external links we've found for you though we know links won't always suit everybody. If you like our links, please return to Liberapedia later when you've got everything you want from our links. If our links don't suit you, you can come back to Liberapedia and look for something that suits you better. Cool Sites that make fun of Dubya