A fossil is a preserved record of a formerly living organism.  After millions of years, most of the flesh of the organism has decayed; and the remaining parts are preserved as, or in imprints of rock.    Almost any organism, excluding microbodies; has the potential of fossilization; but the conditions have to be exactly right for this to occur.  The study of fossils is known as palentology.

After an organism dies, parts like the skin and muscle usually decay.  In a type of fossilization known as permineralization, mineral water fills in the gaps where such parts were.  The organism must be covered in sediment for such a transformation to occur. Very rarely soft parts or an organism are preserved as fossils. Such fossils are frequently major discoveries that greatly improve our understanding of past life. [1]

Fossils provide strong evidence for evolution.  However, Conservatives don't believe that.  They always cite the fact that even Charles Darwin knew that the fossil record was incomplete; while it was incomplete in Darwin's time, a whole lot more has been discovered since then. Fundamentalist Christians like to imagine nothing new has been discovered since Darwin, which is rather silly.  This argument comes from the misconception of creationists that Charles Darwin was randomly walking down the street one day and the whole evolution thing just fell into his head.  They think that if science doesn't explain everything, instead of trying to discover more, we should invalidate the whole thing and just use their biblical ideas. 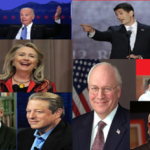