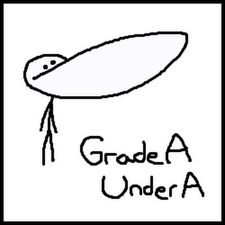 GradeAUnderA is a British YouTuber who makes his videos using Microsoft Paint. His videos consist of everyday subjects that desperately need to be given a rant, such as the barbershop, public bathrooms or the English alphabet. The channel includes two characters: the first character being a shorter stick-figure with a severe underbite, and the second being a taller, older stick-figure with a severe overbite. He was active from 2013 until early-2017, gaining over 3 million subscribers in the process. In early-2017, he mysteriously stopped making YouTube videos without explanation. He would later make a video in mid-2017, as well as in late-2017. After making no videos in 2018, he returned to YouTube to make a video on January 1, 2019. He often would use profanities in a large scale, which means YouTube can put his videos on "restriction" meaning he won't receive income. He is part of the WikiTubia Hall of Fame.

GradeAUnderA tends to be a left Liberal, and has favorable views toward Jill Stein, as shown in a two-part series he produced just before the 2016 U.S. Presidential Election (Hillary Rant, Trump Rant). He likes Bernie Sanders, and made a video entitled "Proof That The Human Race Is DOOMED!!" where he ranted over the 2016 Primaries, in which he made the argument that Hillary only received more votes because she is a woman (more specifically, blaming the feminists). Grade tends to be "anti-SJW" and made the theory that all of us are inherently at least a "tiny bit" racist (and sexist) in one video. On the downside, he thinks that Al Sharpton is an idiot, but hey nobody's perfect.