Liberapedia
Register
Don't have an account?
Sign In
Advertisement
in: Articles with unsourced statements, People Who Suck, Things That Are Not Awesome,
and 8 more

View source
Well, we know this exaggerates, but there's an element of truth.

John Ellis "Jeb" "Jebster" "Jebmeister" "Jebhead" Bush is the evil Republican Governor of Florida who stole the election of 2000 for his brother, George W. Bush from the more qualified candidate Al Gore; thus causing eight of the worst years in the history of the United States of America, plus all the years we had to recover from it.

A Family of Villains

These people are all related to Jeb Bush:

His brother George was already the governor of Texas; Jeb stole Florida so they wouldn't have to fight over Texas.   This is how they compared as governor:

Clearly, both Bushes were more liberal when they were governors than when George became president. Which means both these things: 1) Don't vote for Jeb for president (EVER) and 2) Rick Perry's the governor of Texas. He'll clearly get more conservative if he becomes president in 2020. So don't vote for him, either.

Since Florida is a swing state with a lot of electoral votes, Jeb knew that he could play a part in his brother's victory. So he and his Secretary of State, Kathleen Harris got together. Harris agreed not to add newly registered ex-convicts and other people who would likely vote for Al Gore to the list of eligible voters. Thus, registered voters were turned away and their votes were not counted. Two ID's were demanded from African-Americans; some cars were even searched. Full ballot boxes turned up missing.

Why they did it

Even before Bill Clinton replaced George H.W. Bush in 1993, America was sick and tired of not only Bushes, but the entire Republican Party. It has been this way since then. Despite what Jeb and George want you to think, Al Gore won the national popular vote by more than 500,000. So Al Gore should have won... NOT ONLY because 500,000 more people voted for him and that's before you count the people who should have voted, but didn't, but that double-bubble ballots for Gore weren't counted, and they often put out confusing Butterfly ballots. The same thing with missing votes happened with John Kerry in 2004. [5]

In 2006 and 2008, the Democrats were awesome and almost invincible, despite what the Republicans did. But they were plotting behind closed doors, and in 2010 they got the House back. In 2012, they lost the popular vote for house seats, but kept the majority because of gerrymanding.

If a political party is so bad at attracting voters that they have to cheat for over a decade to get anything done, it means that either they have to change their ways, or the other party should be able to take over. It's more than clear that unless the Republicans are willing to make some major adjustments, they should just concede to the Democrats.

Jeb's secret guacamole recipe was released to the public on January 2 2016. Apparently It is the same Guacamole that sits inside his $75 Guaca bowl on sale. The ingredients are

Avocados “Make sure they’re not too ripe, but they gotta be ripe enough.”

Jalapeño “rather than chile serrano”

Garlic “not too much”

No lemon and no tomatoes.

And don’t go making this in a bowl. “You gotta use amolcajete,” Bush said.

Gotta hand it to Bush. Him trying to release his so-called Guacamole recipe so he can boost his campaign just made him look more stupid then he already is. And the irony about this is that he calls it a secret recipe when he just reveled half of it.

If Jebby does not become president in the year 2016 then he is going to sign on to a new program call the Jebsons. The television is going to Star Jeb as himself Karl Rove as Mr.Banana Guy. Jeb's brother Dubya as Monkey Man or Ape man. Donald Rumsfeld as DumDum, Dick Cheney as Dick Head, Rush Limbaugh as Hairbrush Harry, John Ashcroft as the craftman Osama bin Laden as the durrky selling you a slurpee, & Condi Rice as Wonder women. Colin Powell & Michael Bloomberg will make guest appearances. Ronald Reagan may make a special guest appearance as Zombie Reagan. The television show will come on after Fox News. So if you think that Bill O'Reilly & Megyn Kelly were annoying you by talking about the NSA. Then wait till you see the Jebsons. You will wish that you never had a TV.[citation needed]  we bet that if Donald Trump were to become President then he would sign an executive order to cancel the Jebsons.

Will the program be a comedy or a crime thriller? Will they feature worse Lying, Cheating, and Stealing than we already saw in reality? That could be a blockbuster!

If he were POTUS 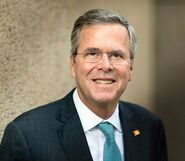 Jeb has humiliated himself 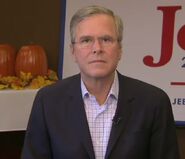 The J proves it all. 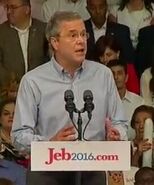 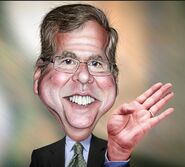 Tigar Woods would not be impressed 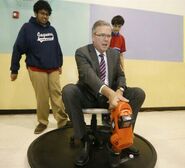 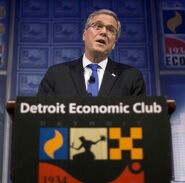 Jeb's mouth is Wilde for investments