Liberapedia
Register
Don't have an account?
Sign In
Advertisement
in: US Politics, US Senators, Politics and Government,
and 8 more

Joseph Isadore "Joe" Lieberman is a US Senator from Connecticut who was Al Gore's running mate in the 2000 US Presidential Election, when they kind of won but didn't get to take office. He then ran for the Democratic nomination for President in 2004 and got some support, but failed. In 2006, Connecticut Democrats nominated, Ned Lamont, for Lieberman's Senate seat because Lieberman supported the Iraq War. Lieberman won re-election as an independent. Since then, Lieberman has pretty much abandoned the Democratic Party and become a huge embarrassment to his supporters, Senators, politicians, Democrats, the state of Connecticut, Jews, Americans, and people in general. Examples of how he abandoned of the Democrats include; his endorsement of Republican John McCain during the 2008 Presidential election, his threat to filibuster health care reform, and his criticism of President Obama for removing terms like "Islamic extremism" from a important national security document.

He also stated that he had not ruled out running as a Republican for re-election to the US Senate in 2012. [1] In the end, he didn't run, retired, and was replaced by Chris Murphy, an actual Democrat.

Joe Lieberman should not be confused with that other great red American, Joe the Plumber 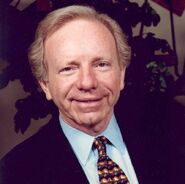