Liberapedia
Register
Don't have an account?
Sign In
Advertisement
in: American People, US Senators, Candidates Who Should Have Won,
and 10 more

John Forbes Kerry is an American politician who was a senator from Massachusetts from the 2nd day of January, 1985, to the 1st day of February, 2013. He was Secretary of State for Obama's second term. He served in the Vietnam war. He also pointed out that uneducated Americans are the ones who typically "get stuck in Iraq".

Kerry was the Secretary of State under President Obama from 2013 until 2017.

John Kerry was funded by a conspiracy involving George W. Bush in order to defeat any rival that could actually have stood a chance of being a decent president. He proceeded to run for President in 2004, and lost. This devastated Democrats and the United States for 4 more years.

In May of 2015 John Kerry suffered a Bike crash in Scionzier, France which resulted in him breaking his right femur. [1] This is not his first bike accident as he previously suffered one in 1992 which injured his shoulder.[2]

Kerry had a feud with senator John McCain about the Obama administration's in its handling of Russia and Ukraine.[6]

In 2004 John Kerry supported gay Civil unions but didn't want to call that marriage. [9] As of 2011[10] he fully supports Gay marriage rights & say they are Human rights. [11] & he raised the issue with the Nigeria president[12]

He did not run in 2016, the only 4 Democratic candidates in the 2016 race were Joe Biden, Martin O'Malley, Bernie Sanders, and Hillary Clinton. 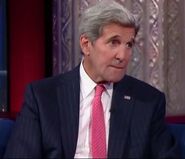 Being interviewed by Stephen Colbert 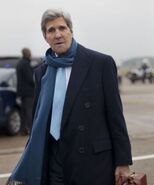