Jon Stewart (born Jonathan Stuart Leibowitz) is a retired former liberal talk show host on Comedy Central. He was the host of The Daily Show for 18 years, and had spawned conservative stealth parodist counterpart Stephen Colbert, a former correspondent. Sadly, he retired in 2015 just as more political comedy gold was arising. He was replaced by Trevor Noah.

After the death of Robin Williams, Stewart has been hailed as the King of Comedy. Long live the King.

In 2021, Jon Stewart made his return to show business with his new AppleTV show The Problem with Jon Stewart. Millennials who grew up on Jon Stewart welcomed the return of the Prodigal Son.

Stewart was born in New York City during the glorious reign of JFK and was raised in a Jewish family. He recalled in 1996 that his grandfather was anti-immigrant...despite immigrating from Russia. He was reported to be a funny man as early as his school days. In 2001 he and his wife got their last names officially changed to "Stewart".

Jon Stewart began to host the Daily Show in 1999. Since then the show has become a huge hit averaging around 1.45 to 1.6 million viewers nightly, a high figure for cable television. In 2008 it garnered it's highest ever viewership when he interviewed Barack Obama and drew 3.6 million views.

A notable moment occurred on April 4, 2006, when Stewart confronted his longtime friend, US Senator John McCain, about his decision to appear at Liberty University, an institution founded by Jerry Falwell, they call themselves Liberty University hypocritically but restrict Freedom. McCain had previously denounced Falwell as one of the "agents of intolerance," In the interchange, Stewart asked McCain, "You're not freaking out on us? Are you freaking out on us, because if you're freaking out and you're going into the crazy base politics world—are you going into crazy base world?" McCain replied, "I'm afraid so." The clip was played on CNN and created a surge of articles across the blogosphere.

He also nearly cried on air on the first show after the 9/11 attacks.[1] & called W. Mitt Romney an idiot.[2] Jon Stewart retired from 'The Daily Show' in August 2015. Obama appeared on his show again and said, "I can't believe you're leaving before me". [3]

Some of Stewart's more memorable lines:

Stewart is very disappointed with fox news. Which is a good thing 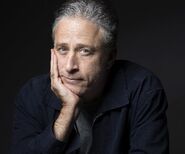 Jon Stewart with his Peabody award.