Karl Rove is frightening. Though supposedly retired on August 31st, 2007, many theorize that Rove will have continued political influence over the nation as a whole.

Rove is probably the nearest thing that anyone involved in the Neoconservative wing of US politics has come to openly admitting literally Orwellian tendencies.

The Los Angeles Times believes Karl Rove is under investigation over attorneys who were fired allegedly with political motives. [1]

He was one of the most powerful men alive. He controlled the Neocon spin and lie machines. He also decided the results of two American "elections" since 2000 but Obama was too strong for him.

So, if you've a free week or two, and a strong temperament, Just enter the terms "Karl Rove" and "Dirty Tricks" into your favorite search engine. You can't believe everything you read on the Internet, but Damn! The only good thing we can think of to say about Karl Rove is that he inspired a really entertaining "Family Guy" episode. Karl Rove as "Lord of the Sith" is just too perfect.

Karl Rove is Bush's brain. He is the handler of George Bush, who must request permission from Rove before performing any action more complicated than going to the bathroom. (Perhaps now he's retired the Shrub has a little more freedom.)

There is a rumor on the Internet that Rove and Bush are secret atheists. Is it likely? [2] [3] Well there are good and bad among atheists.

Statements about other people

In October of 2015 Rove called Bernie Sanders "An Elderly Dyspeptic Bilbo Baggins" which was really amusing because even though Sanders is Older then Rove. He is Ten Thousand time better then Rove.[4]

Rove has said many things about Barack Obama. But he said that "Obama wishing Merry Christmas” in Hawaiian proves he’s un-American and soft on ISIS"[5]

In January of 2015 he said that W. Mitt Romney had a shot at winning the white house in 2016.[6] however a few days later Romeny ruled out running for President of the United States in 2016.[7]

Trump is a loser

In January 2016 Karl Rove said he believed that the GOP is going to lose the White House & Congress if Donald Trump is the Republican candidate for President of the United States. Rove believes Cruz would also harm the GOP as presidential candidate and would prefer someone else, not either of thowe two. [8] In March 2016 the UK BBC wrote that Trump will more likely than not be the Republican candidate. [9] It looks like Rove and the GOP will have to live with that. 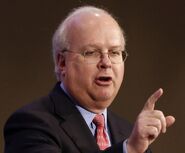 Karl Rove measuring the size of his ding-dong. 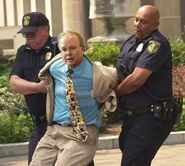 That glorious moment when Karl Rove gets arrested.