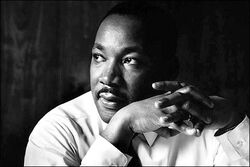 Martin Luther King Jr was a Christian cleric and Civil rights activist who fought tirelessly for equal rights. He was most likely a Socialist. Conservatives and Libertarians seem to like him and claim he was a conservative. However MLK thought differently.

King also took stands that most in the Christian Right would disagree with. When asked about the Supreme Court’s decision to ban school prayer, King responded,

I endorse it. I think it was correct. Contrary to what many have said, it sought to outlaw neither prayer nor belief in god. In a pluralistic society such as ours, who is to determine what prayer shall be spoken and by whom? Legally, constitutionally or otherwise, the state certainly has no such right.

King said of Reagan, "When a Hollywood performer, lacking distinction even as an actor, can become a leading war hawk candidate for the presidency, only the irrationalities induced by war psychosis can explain such a turn of events."

King of course was a great opponent of the free economy. In a speech in front of his staff in 1966 he said,

You can’t talk about solving the economic problem of the Negro without talking about billions of dollars. You can’t talk about ending the slums without first saying profit must be taken out of slums. You’re really tampering and getting on dangerous ground because you are messing with folk then. You are messing with captains of industry… Now this means that we are treading in difficult water, because it really means that we are saying that something is wrong…with capitalism… There must be a better distribution of wealth and maybe America must move toward a Democratic Socialism.

Martin Luther King was a very left wing person, this is because he had a functioning brain. However everyone loves MLK in America so Conservatives praise him, despite the fact that Martin Luther King despised the right.

Note to readers speaking English as a foreign language. The word Negro was acceptable when Martin Luther King Jr. wrote this. Tody negro is seen as a racist word and is best avoided.

Recently, his niece has tried to paint him as pro-life. It is unknown if she was ignorant or dishonest, but MLK was pro-choice.

There is scarcely anything more tragic in human life than a child who is not wanted. That which should be a blessing becomes a curse for parent and child. There is nothing inherent in the Negro mentality which creates this condition. Their poverty causes it. When Negroes have been able to ascend economically, statistics reveal they plan their families with even greater care than whites. Negroes of higher economic and educational status actually have fewer children than white families in the same circumstances.