Michael Dale "Mike" Huckabee is a Republican politician who ran for President in 2008 and 2016. Huckabee wants to turn the US into a theocracy [1] so anybody with any common sense isn't going to be voting for this guy. "Amend the Constitution to God's standards" is this candidates cry for Christian Conservative Jihad.

He's talking about amending the US Constitution to bring it in line with "God's standards." Even religious scholars have difficulty reaching unanimity on that subject, but doubtless prophet Mike will keep us informed of what standards the Lord God Almighty deems to be appropriate for America. [1]

He was the governor of Arkansas and he's also a Baptist Preacher.

One of his most famous quotes from the campaign trail was "There's only one set of laws that really matter... If you think about it, the Ten Commandments really cover it all.... I think it's easier to amend the Constitution to fit God's standards than it is to amend God's standards..." Which is great, because amending God's standards is a beaurocratic nightmare! You've got to get three-fourths of the angels to ratify it, and then it goes back to the House of Cherubs and you know they're going to load it with pork.

That's right folks. Mike Huckabee wants the Constitution of the United States of America amended to fit what Bronze Age people, Iron Age people and people from the Roman Empire wrote between 2,000 and 6,000 years ago.

Incidentally he doesn’t believe in Evolution and doesn’t even know that humans are primates.

Huckabee was running for POTUS again hoping to get a shot. Huckabee told Ben Carson that he should look up his biography on Foreign Policy. [2] Huckabee cancelled his campain on February 1 2016. [3]

Mike Huckabee speaking at an event during his 2008 presidential campaign 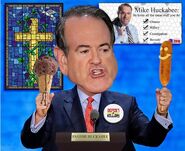 What goes on At Huckabee's church 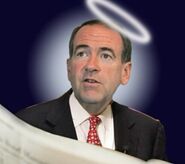 I was sent by god-Mike Huckabee (Note: he never said this)