Repeated Adultery with younger Women, while each successive wife was seriously ill. Attacking mortgage lender Freddie Mac, while secretly getting paid $1.6 million as a lobbyist for them. A half-million charge account at Tiffany's Jewelers for his latest, youngest woman (that we know of).[1]

Newton Leroy "Newt" Gingrich is a former Republican Speaker of the United States House of Representatives and very many people hate him for numerous reasons. He wanted to be President, but he didn't make the nomination. Newt doesn't think doing oral sex with a lady who isn't his wife is adultery. Below is a quote from Anne Manning who had oral sex with Newt, we apologize for the unpleasant imagery of someone having oral sex with Newt.

"We had oral sex," Manning revealed. "He prefers that modus operandi because then he can say, 'I never slept with her.'" She added that Gingrich threatened her: "If you ever tell anybody about this, I'll say you're lying." [2]

And Newt STILL WENT after Bill Clinton even though he did the same himself. He’s also accused of financial irregularities. Never mind at least Bill Clinton didn't leave his wife while she was sick! If she ever was!

Some say he might have become Trump's running mate to smoothen the relationship between Trump and the GOP.[4] 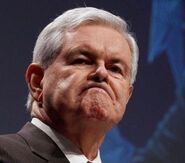 The Moon after Newt's Conquest.