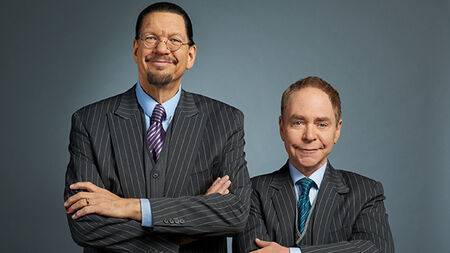 Penn and Teller are a comedy duo who have starred in multiple TV shows, recently have discussed their libertarian viewings (among other things) in their show Penn & Teller: Bullshit! Penn does all of the talking while Teller (born Raymond Joseph Teller) is the silent puppet and often-times stunt person.

They have come out against gun control and illegal drugs ie they think illegal drugs should be legalized. People with guns are given freedom to cause problems for the rest. Illegal drugs harm addicts. The drugs also harm people who are attacked, frightened or abused by intoxicated people. They have also come out against the FCC, the Patriot Act and have supported the legalization of prostitution, don't want porn banned, gay marriage, and polyamory (marriage amongst more than two people). In terms of capitalism, they tend to be fiscally right-wing, however, and have done shows against the Endangered Species Act, and the Americans with Disabilities Act (which mandates handicapped parking amongst other requirements), complaining that (amongst other things) they take away the rights of private property owners. According to these two Libertarians, property rights of rich people count for more than the freedom of vulnerable disabled people and irreplaceable endangered species. They've also done an episode defending Wal-Mart and an episode saying that free trade can help nations remain at peace.

Penn and Teller have also done episodes against the death penalty and reparations, although these seem to be personal views of Penn and Teller and not libertarian philosophy in general.

On an episode of online video blog 'Penn says' Penn has come out in support of assisted suicide.