Liberapedia
Register
Don't have an account?
Sign In
Advertisement
in: Political parties in the United States, Conservatives, Douchebags,
and 7 more

View source
We exaggerate just a little sometimes.
This article is a bit subjective. If you don't like it ... sorry about that.

"
"Facts are stupid things"
--Ronald Reagan on his party's ideology[1]
" 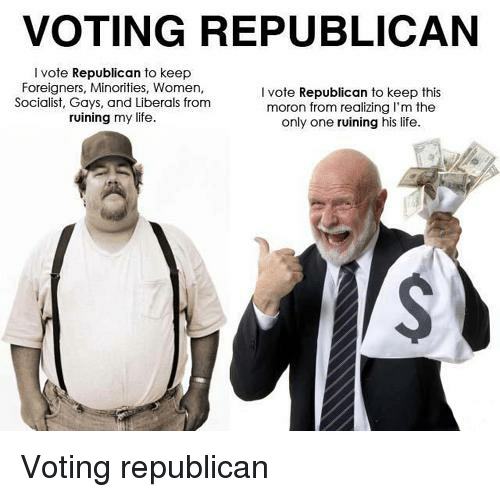 Republicans weren't always bad (as a matter of fact, Abraham Lincoln who was the father of the Republican party would be considered highly Democratic nowadays. Back then, Republicans were Liberal and the Democrats were conservatives). How things have changed.

The rich, greedy Republicans (like big buisiness owners) often are ruthless towards people of lower status in Capitalism. A large part of the time, they want to cut taxes for the rich, because they apparently can't *afford* to pay. Instead, they let the very poor go hungry and let illnesses kill or disable their victims (because according to them, health care is "socialism"). Instead of actually helping the poor or even donating a FRACTION of their money, the Republicans say "the poor should rise themselves up". Yeah, because that's an easy thing to do in this economy...

Next, we have the over-religious Southerner type of Republicans, the ones who almost regularly oppose many sensible scientific theories because they think the Devil put it all on Earth to refute the "truth". Evolution is one of the biggest scientific theories they oppose. Some Republicans even also oppose Einstein's Theory of relativity because they imagine relativity means the same as moral relativism (according to Conservapedia). These Conservatives mostly live in the Bible Belt, otherwise known as the deep south.

Republicans tend to have the most incomprehensible opinions and strange morals. According to them, abortion is wrong but the death penalty is right. Stem-cell research is wrong even though it can help sick people. Letting the rich consume the Earth's natural resources, meanwhile destroying the environment, is right. The worst of them consider hating Jews, Blacks, South Americans, Central Americans, Mexicans, Arabs, Asians, Native Americans, right. Republicans consider building polluting oil wells, trying to shut down some scientific progress, starting batshit-bullshit rumors about Lefties/Moderates/Democrats, suppressing women's rights, telling a rape victim or a pregnant teen she can't have an abortion, letting people roam in the streets ARMED with deadly assault rifles (lack of gun control), or not caring about the hungry, poor people... being moral. They also believe that anybody who doesn't believe exactly what they believe is a Communist who wants to destroy America.

However, during the mid to late 1800s, the term "Republican" was associated with Liberals, such as Abraham Lincoln. Also, the Democrats were conservative. This continued until about the early 1900s, when the Liberals and the Conservatives switched parties. (There still are a few Moderate Republicans around if you look for them.)

To be a Republican

To be a Republican, you must first revere Ronald Reagan almost as if he were a god, and second you must think the world revolves around America. If you refuse to do these things, then you are a automatically a terrorist, according to many Republicans.

To be a Republican you should also embrace the concepts of paternalistic moral guardianship and shameless corporate advocacy. Keep in mind it's not the actual policy to be moral or guard society, but to maintain the pretense of these things while shifting freedom to corporations and the rich and shifting responsibility to ordinary people and the general public.

Don't take everything we write seriously.

Our scientists have failed to find out why Republicans claim that their patriotism is unquestionable and why everyone who has a different opinion on that is Un-American, but they assumed it's got something to do their low IQ. It's not a problem for them when they have to go send other people to war for their country but however, they aren't enthusiastic about paying taxes for it.

A wonk is a political geek, so a policy wonk is someone who looks at policies before voting, right? Not according to Republicans!!! To them, THEY are the only policy wonks!

Ever since Obama was elected in 2008, many Republicans have assumed that ALL Democrats only vote based on irrelevant bullshit like gender and colour, but it is unknown whether they mean JUST Democrats or if they mean all lefties (they probably mean all lefties when they refer to "Democrats" cuz most Republicans are SUCH black and white thinkers)... they'll probs push that narrative again if Hillary is elected... except they would be partially right this time because Hillary has pushed the woman card lots of times this Primary season![2]

Republican tactics during an economic crisis

We imagine the following was taken from Republican book What to do When One of us Screws up (Again). The book was published for ardent Republicans and conservative pundits only, but they were stupid enough to give it to Stephen Colbert thinking he was actually a conservative.

During the Bush presidency

What to do regarding the elected Democratic president (Currently Obama)

Brand the president as a socialist and try anything (regardless of how desperate it is) to make him/her look bad. (...) Try to defend the Republican presidency by blaming the economic crisis on congress and the new president. Fight all efforts to fix the economy so the Democrats don't get to take the credit.

Things Republicans Love With a Passion

Things Republicans Hate With a Passion