Liberapedia
Register
Don't have an account?
Sign In
Advertisement
in: People who love Donald Trump, Racism, Racist,
and 22 more 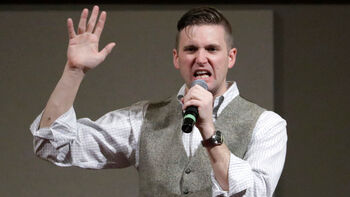 Richard B. Spencer is a notorious American racist, white supremacist and leader of the National Policy Institute. Overall, Spencer tries to manipulate the "Liberal mind" into thinking like he does, and has unfortunately succeeded in this department. Richard has credited himself with creating the term "alt-right".

Similarly to Ben Shapiro, Richard Spencer has spoken (or at least has attempted to) at many universities across America. In October 2017, he spoke at the University of Florida, but was of course met with controversy, counter-protests and even violence (Link). Just after the inauguration of Donald Trump in 2017, he was punched in the public streets while giving an interview.

Richard Spencer (along with nine others) have been banned from stepping foot onto the University of Virginia grounds for four years starting in October 2018, despite being an alumnus.[1]

His wife has accused him of physical abuse, claiming to have "grabbed her by the neck" and "punched her in the face" when she was nine months pregnant. Spencer denies these claims.[2]