In her teenage years, Hontiveros was part of the Von Trapp children in the Repertory Philippines' play 'The Sound Of Music,' alongside Lea Salonga, Monique Wilson and Raymond Lauchengco.[1] It is also during this period when she was first introduced to activist work as an organizer in the campaign against the Bataan Nuclear Power Plant in her high school.[2]

Having served as a journalist for ten years before venturing into politics, Hontiveros is a recipient of the Kapisanan ng Mga Broadkaster ng Pilipinas' Golden Dove Award for Best Female Newscaster. Because of her work in the peace talks with the National Democratic Front, she also received the Ten Outstanding Young Men (TOYM) Award for Peace and Advocacy in 2001, and a Nobel Peace Prize nomination in 2005.

Currently, she is serving as Chairperson of Akbayan, a Democratic socialist party that has been espousing the following causes: empowerment of Women, upholding LGBT rights, and fighting for much needed political reform in an effort to bring about true good governance.

In Hontiveros's career as a politician and activist, she has been affiliated with a number of organizations and movements, including the following:

Hontiveros first entered politics as the third nominee of Akbayan Party-list in the 2004 National Elections. She is one of the prominent figures of the anti-GMA forces, especially during the height of the Hello Garci controversy of 2005. In the International Women's Day of 2006, she was arrested and brought to Camp Caringal in Quezon City without warrant despite the peaceful nature of the assembly marking the global event.[3] Hontiveros eventually became Akbayan's first nominee in the 2007 Midterm Elections. She was a member of the House Minority as well as the following Committees in the 14th Congress:

Successful pieces of legislation that were crafted and filed by Hontiveros in Congress include the Cheaper Medicines Law that lowers the cost of essential medicines by allowing parallel importation and compulsory licensing, and the Comprehensive Agrarian Reform Program Extension with Reforms (CARPER) Law that extends the old CARP Law as well as provides a program better suited to the needs of the farmers and the agrarian reform beneficiaries. Hontiveros’s legislative track record also include, among others, the Anti-Prostitution Bill that aims to look at prostitution as a symptom of inequitable and exploitative social structures and prostitutes, the Gender Balance Bill that aims to ensure women’s representation in all structures of governance, and the Students' Rights and Welfare (STRAW) Bill that aims to promote and protect students' liberties at all levels and in both public and private schools.

Running under the ticket of now President Benigno Aquino III, Hontiveros placed 13th overall in the race for senator with less than ten million votes - almost making it to the Top 12 winning senators in the 2010 National Elections.

After the elections, she remained active in numerous issues concerning the marginalized and the abuses of the previous administration. She became a prominent figure alongside Senators Miriam Defensor Santiago and Pia Cayetano in the nationwide campaign for the passage of the Reproductive Health (RH) Law, which she co-authored during her stint in Congress.

Hontiveros attemped to run again for senator in the 2013 Midterm Elections under the Team PNoy ticket. She was unable to make it to the "Magic 12" (the number of senatorial seats up for grabs ever election) once again, in spite of garnering less than eleven million votes (a million more than her last attempt).

It has been speculated by some that she may yet attempt for one last try to run again in the 2016 senatorial elections. 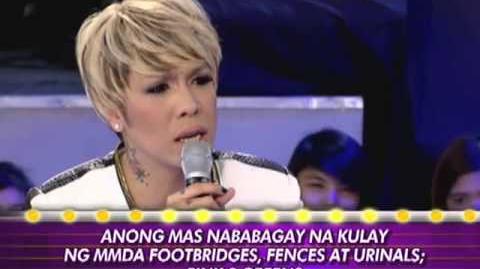