Liberapedia
Register
Don't have an account?
Sign In
Advertisement
in: Stubs, Democratic Party, US Senators,
and 8 more

In Oregon, Senator Ron Wyden is known for his strong, effective leadership on the issues that matter most and for his accessibility to the public. Every single year, he holds a town meeting in each of the state’s 36 counties (...) In the Senate, Senator Wyden is known for his bipartisan approach to solving problems, his effectiveness in getting things done, and his creative approach to tough problems - particularly in the areas of health care, technology, and natural resources. [1]

Ronald Lee "Ron" Wyden (born May 3, 1949) is the senior United States Senator for Oregon, serving since 1996, and a member of the Democratic Party. He previously served in the United States House of Representatives from 1981 to 1996.[2]

Ron Wyden won the award for Legislative Champion Award.[3] while James Inhofe throws down snowballs & Rick Perry says Oops at Political debates. Wyden is better than these two Republicans Then on March 16 2016 Wyden also won the award for steel champion.[4]

Wyden teamed up with another senator named Rand Paul (son of Ron Paul) to call for the public release of 28 classified pages from a 2002 intelligence report on the attacks on The Pentagon & The World Trade Center. members of the Saudi royal family have been accused of financing 9/11 and the senators want relevant information made public. [5]

On September 30 2005 Ron Wyden & another Senator named Byron Dorgan introduced a bill that that would change language included in the emergency Hurricane Katrina spending bill that they say facilitates potential abuse of certain government credit cards, which have been badly mismanaged in the past. Government procurement rules allow small purchases with government credit cards, which bypasses bidding procedures required for bigger purchases.[6]

Wyden hates the NSA spying on American people & says that Edward Snowden is correct about it.[7]

Ron Wyden is concerned about the sillier Republicans who oppose Science.

The last few years, a number of new forces have emerged in American politics, forces that deny science, forces that believe constitutional protections are only for their own beliefs, forces that reject bipartisanship in the name of ideology. (Ron Wyden) [8]

In 2016 Wyden wrote a letter to President Obama's Secretary of the Treasury Jack Lew. Wyden cited many cases where terrorists got large amounts of money when the USA should have been able to prevent this. Notably US based companies have been used to transfer funds to terrorists. Wyden feels the United States is not doing enough to track funds that ISIS and other Terrorist organisations get or to prevent them getting funding. [9]

Due to Donald Trump's statement on wanting to ban all Muslims Wyden bashed the statement saying that they were "outlandish" & "insulting to our American values of welcoming refugees from violent oppression and terror". [10] Other people from Oregon are bashing trump.[11]

To tell you the truth Ron Wyden is not exacty running for President (though we wish he was right now) however he is supporting Hillary Clinton for President in 2016.[12] [8] Wyden also supported Hillary in 2008. 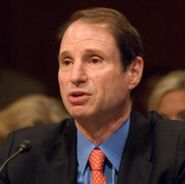