Russell Dana "Russ" Feingold was the senior US Senator from Wisconsin until a crazy teabagger named Ron Johnson took over.  He did really amazing things, such as being the sole senator to vote against the USA PATRIOT Act[1].  He also co-sponsored the McCain-Feingold Act, which would have helped get money out of politics.  It never made it too a vote and then Citizens United came and ruined everything.

Russ is an honest, independent-minded public servant who's not driven by what's politically expedient; he's driven by what he knows is right for the people of Wisconsin. (Barack Obama) [5] 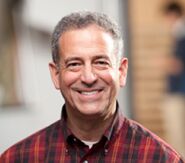