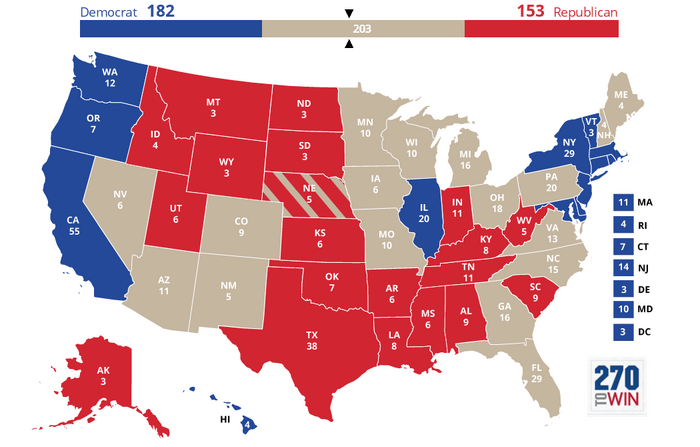 A Swing State is a State in the United States of America that can historically votes either Democrat or Republican depending on how popular the parties are there. Swing States, come about because of the provision of State's laws that awards all of the States Electors to the winner of the Presidential election in those States. At present, 48 of the 50 US States award their Electoral votes in a Winner-Take-All fashion. The States of Maine, and Nebraska, award 2 electoral votes to the Statewide winner, and the rest of their electoral votes to the winner of each of their Congressional Districts.

A swing State is usually a classification of States that have "swung" at least once since 1992. However, in some cases, a State may have been won by the same party since 1992 but polling indicates it is competitive enough that a swing is possible. Minnesota is an example. Some States that have swung since 1992, but have since been carried moderately or definitely by one party are not considered swing States. These would include Kentucky, Louisiana, West Virginia, Arkansas, Montana and Tennessee (all of these States voted for Bill Clinton in 1992 and/or 1996, but haven't voted Democrat since). Indiana is another example, going for Obama in 2008, but didn't vote for Bill Clinton nor has voted Democrat since.

The election system used in the United States, the Electoral College, determines the winner not by popular vote, but by counting in which States the candidate has a majority. Each State has a number of electors equal to the number of that State's Congressional delegation. Thus, each State has two Electors for it's two Senators, and at least one elector for it's Representative, with the rest of the electors apportioned by population, for a total of 538. This arrangement results in a slight to moderate over-representation of the least populous States in the Electoral College. As a result, the States where a certain Party's candidates are known to win are pretty much ignored by the candidates -- it doesn't matter if the candidate wins 51% or 99% of votes, they still get all the votes from the state. This makes the swing States matter much more; in fact, winning the whole election depends on the candidates winning in the swing States. Not only that, but the system can result in the candidate winning the election while losing the popular vote -- which was exactly what happened in the 2000 and 2016 U.S. Presidential Elections.

(*) Unlike the rest of the 48 states, Maine and Nebraska do not use the "winner-takes-all" method. For each of these states, the state-side winner wins two (2) electoral votes, with the rest of the 2 (Maine) or 3 (Nebraska) going to whoever captures the most votes in those congressional districts. Statewide Nebraska is considered a "Red State".