Liberapedia
Register
Don't have an account?
Sign In
Advertisement
in: Too Conservative for the GOP, People Who Want Christian Sharia, People who suck,
and 15 more 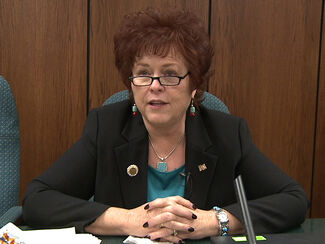 Sylvia Allen is a braindead, Ultra-Conservative Fundamentalist loon. She has been an Arizona Senator since January 5, 2015. Also, she was a chair member for the Navajo County from 2000-2005. Unsurprisingly, she is a Republican [1]. She is a member of the Mormon/LDS Church.

On March 24, 2015, during a Arizona Senate meeting discussing whether or not guns should be allowed in public places, Sylvia Allen went off-topic and ranted about how the meeting/debate should be about whether or not to mandate church attendance.

"Probably we should be debating a bill requiring every American to attend a church of their choice, on Sunday. "- Sylvia Allen after drinking the Kool-Aid

Where do we even begin? Has she not read the Constitution? Has she not read the First Amendment, or does she believe it only applies to Christians? The United States Government, or any State Government, cannot promote any religion. This means that not even President Trump or his minions (*cough* Betsy DeVos, *cough* Jeff Sessions) can make the United States a "Christian nation" or mandate weekly Church Attendance. We're willing to bet she hasn't read the Treaty of Tripoli either.

In late-February 2017, she was one of many Senate Voters to give police "more power" in seizing protests (even peaceful ones). She said that "young people" are encouraged to go out and protest, and she wants them all in jail [3].