Liberapedia
Register
Don't have an account?
Sign In
Advertisement
in: American Presidents, Presidents, US History,
and 25 more 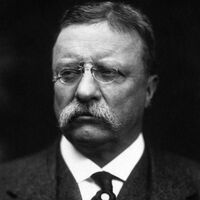 During the last few days of his Vice Presidency, he said his famous phrase "Speak softly but carry a big stick." Nowadays, Republicans have turned it into "Speak loudly and be a big d---".

Theodore Roosevelt was the one of the greatest presidents of the United States of America due to the numerous policies he introduced, such as: