Liberapedia
Register
Don't have an account?
Sign In
Advertisement
in: Bitches, People Who Want Christian Sharia, Christian Exclusivists,
and 6 more 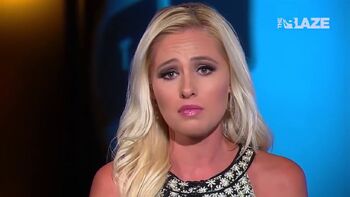 Tomi Lahren is an right-wing commentator and host on Fox News, formerly working for Glenn Beck's The Blaze. She is the spawn of Shirley Phelps-Roper and hates Liberals, minorities, atheists, evolutionists and anyone else who doesn't like her. She LOVES President Trump and wishes those who oppose him either AIDS or Cancer.

Lahren had made it clear that she was pro-choice, a major factor in her firing by The Blaze, a company owned by Glenn Beck. This has earned her push-back from many of her supporters. The reasoning she gave for her decision, however, was very foolish and unconvincing. Instead of laying her thought process in being pro-choice, she instead proposed ignoring abortion to focus on the successes of the Trump Administration.