Good day to you! I'm Rushwrj13, an active member and administrator here at Liberapedia. I live in the United States and believe the government and people here need to be more open toward progressive ideas. Personally, I think we should become a Social Democracy, but not purely Socialist. My timezone is GMT-5. If you have questions on editing, or if you want to dispute a block, feel free to contact either myself or User:Proxima Centauri.

**I personally believe there might be a god. I'm a "5" on the Dawkins Scale. 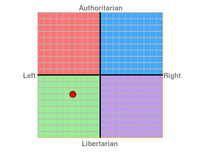 Politicalcompass.org has "diagnosed" me as a "Moderately-Left, Moderate-Libertarian". I'm not saying the website is completely accurate, but it is one of the better sites. One complaint I have about the website is that they don't have a "neutral" option you can press. In other words, you either "strongly disagree," "disagree," "agree" or "strongly agree". As an anti-authoritarian, my philosophy is to do whatever you want with your life, body or religious stance, as long as said-actions do not directly harm others.

Rushwrj13 on the Issues and his Personal Beliefs

Ever since the election of President Donald Trump, I have been thinking about Sharia Law (only catch is that it's the Christian form of it). The First Amendment clearly states that the United States Government cannot establish a religion, nor can they prohibit the exercise or worship of ANY religion. This means any Islamic person who wants the government to establish Sharia Law will not get his or her way, nor would a Christian wanting to establish Biblical Law (Christian Sharia).

For the opposing parties of Donald Trump, I want qualified candidates who want to do the right thing, rather than a load of "Establishment Democrats" trying to corrupt the Liberal ideology. That is one of the reasons I am not a fan of, nor do I like, Hillary Clinton. I hope the Democrats bring an outsider, such as Cenk Uygur or possibly even Tulsi Gabbard. As much as I like Bernie Sanders, his age will be concerning if he does run. Kyle Kulinski, on the other hand, will only be 31 (4 years too young).

I think that citizens should have the right to own a firearm (gun) of reasonable standard as long as: 1. They are 21 years of age or older. Exception: if someone is between 18 and 20 years old and currently in the military or prior military experience; 2. They have tested negative for mental conditions such as Bipolar Disorder, PTSD or Schizophrenia; 3. The firearm is of reasonable standard (i.e. not an assault rifle such as an AR-15); 4. They have no criminal (felony) record.

Furthermore, I strongly believe the United States should utilize stricter gun control. Many polls in recent years have shown the grand majority of Americans favor a "Universal Background Check" where every owned gun is entered into a database. In terms of American education, every school (at least the public schools, colleges and universities) should have some type of armed police force. Quite frankly, it's very sad I have to make this conversation.

As stated in the "2020 Election" section, I do not have favorable views toward Hillary Clinton. For one thing, she is nowhere near as progressive as Bernie Sanders (Independent-VT) or Jill Stein (Green-MA), and has shown this in terms of her social and economical views. In July 2016, WikiLeaks showed over 20,000 emails of the DNC (Democratic Party National Convention) favoring her over Bernie, which is corruption. According to a Huffington Post article, some of the WikiLeaks emails were centered on Bernie Sanders's religious beliefs, suggesting that Hillary should win the primary over Bernie solely because she is a Christian ([1]). In a Business Insider article, it is mentioned that Hillary became the first Democratic Party candidate since 1972 to not campaign in Wisconsin, probably based on her belief she would easily win that state since they had voted Democrat in every election since 1988. Despite this, Wisconsin had remained a swing state in every election based on very close polls ([2]). Meanwhile, Bernie Sanders takes time out of his day by campaigning in even the reddest of states, such as West Virginia.

Community content is available under CC-BY-SA unless otherwise noted.

Ranked #3
on this wiki